The Guild Gavel and Stand

When John Taylor recast the ring of eight at Hughenden in 1952, the local band carried out eight hundred and thirty-three hours of work assisting in the rehanging and raising money for the project. Although this may be common in restoration work in the 21st century, fifty years ago it was
more unusual.

One of the money-raising ideas was the turning of model bells from the wood of the old oak frame. The tower captain at Hughenden, Roland Biggs, produced these and to commemorate the new bells he made a gavel and stand in the form of a bell resting in a model frame. It was presented to the Guild in 1954 to be used by the Master at meetings. 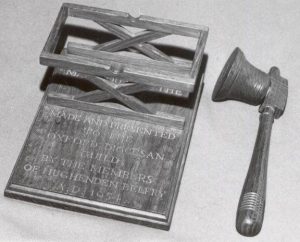 © 2006 Bill Butler
The inscription reads:
MADE AND PRESENTED
TO THE
OXFORD DIOCESAN
GUILD
BY THE MEMBERS
OF HUGHENDEN BELFRY

In 1956 George Edmans, of the Central Bucks Branch, suggested that the Guild, and perhaps all the branches, should each have a banner similar to those used by the Mothers’ Union. This novel idea sparked off some interest but when a sub-committee considered the proposal it felt that the Guild could not afford it. Mr Edmans kept alive the idea by volunteering to have it made for the cost of the materials. 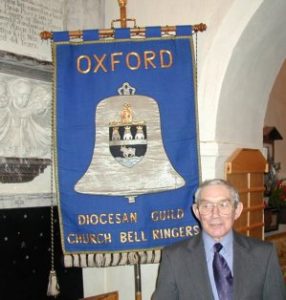 In the end, the Central Bucks Branch donated £15 towards the cost of the materials and it was produced in the village of Great Horwood, Bucks. George Edmans designed it and turned the cross and ornamental boss from wood taken from the old bell frame. Another ringer, Mr M Jamieson, wove the cloth and Miss E Irving made a splendid job of the embroidery.

The Master, Revd C Eliott Wigg, dedicated the banner in Christ Church Cathedral at the 1958 Annual Festival and it has been carried at many Guild and Branch meetings since. It was also used at the wedding of the Guild General Secretary in 1971 and is often paraded at the funerals of Guild members.

After nearly fifty years of use it began to show some signs of wear, and Ruth Groves of the Chiltern Branch carried out some stitching repairs in January, 2005. At the same time Graham Clifton, of the Banbury Branch, repaired one of the wooden arms of the cross.

The Guild Master’s Badge of Office

When George Edmans suggested that the Guild should have a Guild Banner in 1956 the idea of a Master’s Badge was also mooted to mark the Guild’s seventy-fifth anniversary. The sub-committee predictably reported that the Guild could not afford it. The estimates obtained at that time were £31 for a gilt white metal badge, whilst a silver-gilt would cost £36, plus £21 purchase tax. The idea was shelved.

To give some idea of how these costs compare with today’s prices, the Guild report cost £7.50 to print that year, members’ subscriptions brought in £124 whilst a collection at the annual Festival brought in £5.55. 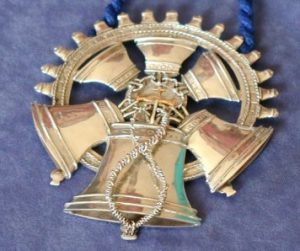 Twenty-one years passed, and a new sub-committee was set up to plan the events for the centenary.

Among the tangible souvenirs produced were bells, goblets and rose bowls in Caithness glass; pint and half-pint pottery mugs; ties and a new Guild badge.

The committee also recommended that a Master’s badge be obtained to mark the centenary.

Members were asked to send in designs and, from about a dozen submitted, one by Stanley G Scott was selected.

After some small modifications it was produced in sterling silver
at a cost of £372.

Members were invited to send in donations, and a total of £131 was contributed.

The badge was dedicated at the Centenary Service on January 17, 1981 at St Mary’s, Reading by the Bishop of Reading. William Butler was the first Master to wear it, initially at the dedication, and later that evening at the Guild social gathering in the Reading Civic Centre where several hundred people had the opportunity to inspect it. 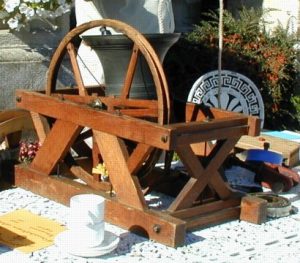 The model bell in its frame was a bequest from Mrs C.W.O.Jenkyn to the Guild, probably made by her husband.

The bell weighs about 20 pounds.

It rests in plain bearings in a frame approximately 24 by 12 inches.

The current Master of the Guild is responsible for it and it is passed to each successive holder of the office.

It is shown on the left being used in a ‘tower maintenance’ session at the Easthampstead Course 2003.