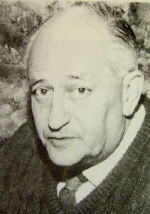 Fred Sharpe was Master of the Oxford D.G., a past President of the Central Council and connected with a great many committees and organising bodies and librarian for the C.C.

He was an outstanding personality in a number of different ways. His numerous interests and his unfailing ability to assist anyone who needed his help and advice, made him one of the busiest of individuals. His amazing collection of bells and their appurtenances, together with detailed records and historical details, were second to none in the world and this knowledge came from a lifetime of interest and study. Fred’s expert knowledge of strains and stresses on towers and belfries was invaluable and he was sought by many church authorities to give his opinion before decisions were made. His leadership in handbell ringing and his patience when teaching young and old to handle and to try out simple tunes were legendary, whilst his books on the bells of several counties are to be found on many ringers’ bookshelves.

The library of the Central Council1, a collection of several hundred volumes and pamphlets, was held in Fred’s ‘den’ at Launton, which was reorganized shortly prior to his death to ease the cramped conditions, as he found the increasing collection made access difficult. The hospitality always extended to visitors to his home was well known; “Come across to the Den,” he would say and you would leave the warm welcome that Janie and Elizabeth were giving you and walk past the bell-wheel trellis to the little stone building beside the house. This was where it all happened: models, photographs, plaster-casts of bells and bell inscriptions on the walls, with a College Youths’ certificate to remind you that this was a good practical ringer apart from all else; the little brown case which had been up so many hundreds of towers with him, containing his white dust-coat, camera and flashgun, torch, callipers, tuning-forks, rules, plasticine and dozens of pencils; the neat desk with the day’s paper-work under a paper-weight replica of some Rudhall lettering; and the books.

There are books about bells and some of the very best of them are his own work; Cardiganshire, Berkshire, Oxfordshire, Radnorshire and Herefordshire, completed not long before his death, along with slimmer ones for Guernsey and the Scilly Isles; books about bells in several languages and of several ages; shelf after shelf of the uniform loose-leaf books containing the details of thousands of towers all written out in his beautiful, bold handwriting and the photographs, mounted and framed in ruled red lines, with their negatives in a transparent envelope on the back; bells, towers, frames, gear, foundries at home and overseas. There, too, was stored experience of the man who carried on in the study of tower structures and bell stresses where E. H. Lewis left off and brought to it his own lifetime’s practical expertise in repairing ancient buildings. And more still, for Fred had a musical ear of quite exceptional sensitivity and an amazing range of manual skills.

But the books were not all about bells. There were shelves of music books for the choirmaster, the singer and arranger of hand-bell music; shelves of topography for an indefatigable traveller; architecture for a professional builder who never ceased to study and love old buildings; railway history to go with some beautifully-made model railway stock in his workshop; and religious books for the busy Lay Reader who seldom passed a Sunday without helping out some neighbouring parish and helped to hold the fort through some long vacancies in his own beloved Launton.

Then there were the handbells and what can one say about them? Nested in their travelling cases or hanging in racks are handbells by almost every known British maker in the last three centuries, searched out, found, identified, refitted and tuned to form a beautiful and unique set which the Launton Handbell Ringers have taken to recitals up and down the kingdom.

This is no magpie hoard, collected for the sake of collecting. The handbells were to be rung; the pictures mounted for display at exhibitions and lectures far and wide; the knowledge and experience set down for the benefit of anyone who needed it. This Den was not a hermit’s cell, where one man retired from the world: Fred’s friends were always welcome to share it and its treasures and to share a bottle from the crate, artfully hidden under a box in the corner. Few experts in any field can have been so unfailingly generous with their knowledge as Fred Sharpe and many, many people are trying to do the kind of work which he did because of the encouragement and practical help with which he set them on the road. Nor was he ever still for very long, here in the Den or anywhere else: few people can have had such a keen sense of duty to push them forward or such a delight in their work to make it a pleasure. And for this we can be so deeply thankful that his energetic soul led him to achieve so much permanent good which we have for always and his realistic wisdom which provided for its preservation. His collection will remain for the use and benefit of all who need to use it and in thousands of communities large and small there are towers restored or saved, bells kept sounding or sounding again, ringers, clergy, church people working and worshipping and grateful for his help and inspiration.

Fred was born in Launton in 1905 and, though not an exceptional method ringer himself, he had been captain of the local band since 1927 and, where necessary, could ring two bells. He had been associated with Launton church from boyhood as chorister, server, ringer since 1920 and churchwarden since 1932 and in 1955 became a licensed lay reader in the Diocese of Oxford.

A memorial service in the Cathedral, Oxford, took place shortly before another, that of Elliot Wigg, another past Master of the Oxford Guild.

2The Sharpe collection of books and bells is held at the Pitt Rivers Museum, Oxford, under the stewardship of the Sharpe Trust.

The Sharpe Trustees website contains details of the collection and provides information on ordering past publications.

The above is a digest of articles in The Ringing World of 1976, some forming an obituary to Fred Sharpe by the Editor, Charles Denyer, the Reverend Prebendary John G. M. Scott and Edwin A. Barnett. Permission for the reprinting of these articles has been granted by the current Editor, Robert Lewis.