WELCOME to the Parish Church of St Peter & St Paul, Shiplake where, for more than 800 years countless people have expressed their faith in God and found spiritual strength for their everyday living.

It is hoped that you will enjoy your visit and that the information contained in this leaflet will be of help to you.

THE AGE OF THE BUILDING

The south aisle of the present building, now the Lady Chapel, formed the original church, the tower being separate. Both date from c.1140.

The nave linking the south aisle with the tower was added in the following century by the lord of the manor, Richard, Earl of Cornwall, a brother of Henry III.

The earliest written evidence for the existence of Shiplake Parish Church dates from 1163 when, as was common in mediaeval times, the church was “appropriated”, with its tithes, for the endowment of a monastery: in Shiplake’s case, Missenden Abbey, Bucks.

Thus, the abbey became rector of Shiplake and in return, it provided a priest to minister here on the rector’s behalf. From this practice of a priest being present on someone else’s behalf, the word “vicar” originated.

Entry into the church is made through the Lady Chapel (that Is, Our Lady’s Chapel) which was the original church.

The altar is a memorial to the men of Shiplake who lost their lives In the First World War.

To the right of the altar, in the south wall, is the 12th-century piscina where the priest cleanses his fingers during the Eucharist.

Near the door is a small monumental brass, once in the floor below. Dated c.1540, it asks for prayers for the “soules of John Symond and Marie his wyfe”.

The 19th-century font is a copy of a Norman font at Iffley, Oxford.

Only one stone pillar remains, the others being of chalk, which was probably dug from the quarry below the church. The stone pillar is to the west of the entrance door and its carvings date from the 13th century. The human heads are thought to represent the Abbot of Missenden, Henry III and his brother, Richard, Earl of Cornwall, the builder of the nave. The stone bust over the capital of the column to the east of the entrance door is also considered to represent Richard, Earl of Cornwall.

The pulpit, reckoned to be of Jacobean origin, came from All Saints, Dorchester (Dorset). Given in memory of the second Baron Phillimore, it was dedicated by the Bishop of Dorchester (Oxon.) in 1980.

The reredos, in alabaster, dates from the 1869-70 restoration of the church, which was undertaken by the celebrated Victorian architect George Street, who designed the Law Courts in the Strand.

The canopied chair, used by the Bishop, is considered by the Victoria and Albert Museum to date from the 15th century and probably belonged to an abbess in Northern France.

Shiplake’s mediaeval glass is French in origin and came from the ruined Abbey of St Bertin, in St Omer. (It was at this abbey that Thomas Becket, made Archbishop of Canterbury in 1163, sought refuge after quarrelling with Henry ll.)

During the French Revolution the monks took out the windows and, to preserve them from the fury of the mob, buried them. Later the glass was disinterred and sold, some of it to the Revd John Boteler, of Henley, then abroad for his health, who presented it to his friend, the Revd Arthur Howman, Vicar of Shiplake, in 1828. More was purchased in 1830 and, by the skill and ingenuity of Thomas Williment, an authority on stained glass, the bits were pieced and leaded together in Shiplake Church.

The mediaeval glass can be seen in the east window above the high altar, in the south-east window of the chancel, and in the east and west windows of the Lady Chapel.

The church possesses an Elizabethan chalice. Other Communion plate dates from the late 17th century.

Registers of baptisms, marriages and burials do not begin, with regularity until almost the close of the 17th century.

The marriage register, listing weddings from 1837-1953, records that on 13 June, 1850, Alfred Tennyson, the poet, was wedded to Emily Sellwood, a cousin of the Vicar’s wife.

Full details of the Church Bells, their history and the Bell Restoration Project can be found here.

Before you leave, please pray for those who serve and worship here. And may God bless and keep you as you continue your pilgrimage. 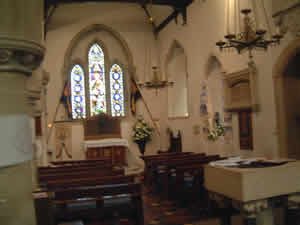 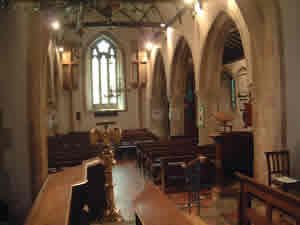 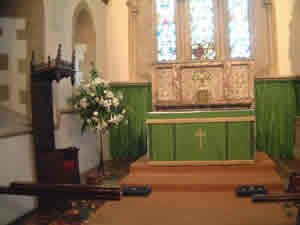 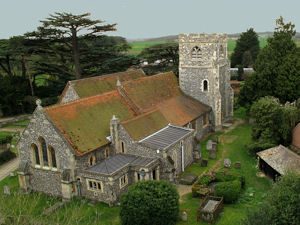