Article and photos by Lindsay Powell

The Oxford Diocesan Guild 8 bell competition took place at St Mary the Virgin Great Brickhill, in the North Bucks branch on Monday 6th May. With a wonderful tea provided by the Great Brickhill WI, ringers were able to stroll between the village hall and the church, and listen to some very enjoyable ringing.

Four courses of Grandsire Triples was set as the test piece, and the competition was judged by Paul and Kate Flavell, who said the judging had been made difficult by the quality of the ringing.  Seven branches entered teams – two more than the previous year, and the ODG youth band joined in. Although they did not complete the test piece, they gave us all a lesson in ringing down in peal, and we wish them the very best for the youth competition later in the year. 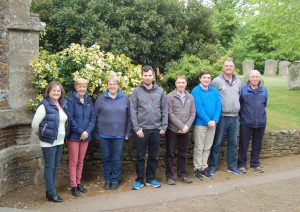 Reading St Mary and St Giles came first with a score of 85%, and the judges said that while the pace was fast, the little bells gave the big bells enough space, and they created a very good rhythm. High Wycombe came a close second, with 83%.  They made no method mistakes and the striking improved as the test piece went on.  Third were Central Bucks, with a score of 80%. There was only one method mistake and a very good recovery. In fourth place were Tilehurst with 78%, 5th place was tied between EBSB and Banbury on 75%, with North Bucks in 7th on 64%. 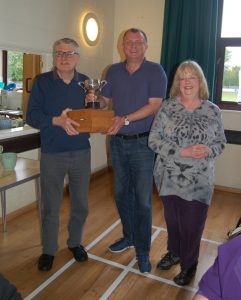 Stephen A Rossiter, the Reading team captain receiving the trophy from judges Paul and Kate Flavell

Many thanks were offered to our hosts in the North Bucks Branch for the welcome, stewarding and the tea, and everyone had a very enjoyable afternoon. The judges presented the trophy to Stephen Rossiter, the Reading team captain.