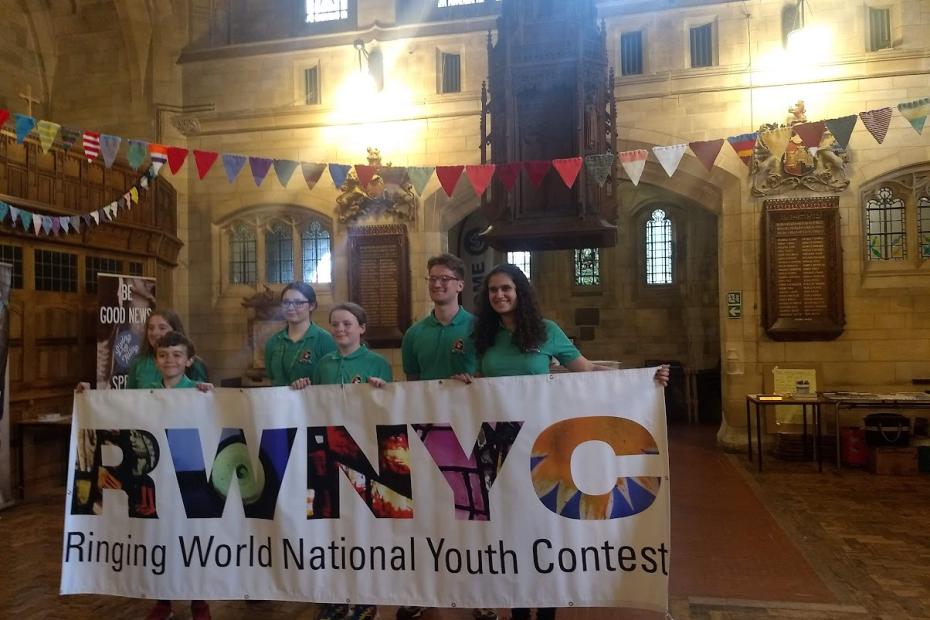 The B&BYR had a fantastic day out to Exeter today with a 7-strong team ranging in age from 11 to 18 years old. As well as the striking competition, contest day includes a tower grab which this year saw the B&BYR ring at a selection of other towers ranging in weight from 1 lb 9.5 oz (the Frank Mack Garage Ring) to the second heaviest ring of bells in the world (Exeter Cathedral). The Bucks and Berks Young Ringers, drawn from children from across the local area, rang in the call change category as a six-bell team, ringing 180 rows of call changes including Kings and Queens.

In this area, there are two Young Ringers teams; the Bucks and Berks Young Ringers based mainly in the EBSB branch with some children from the Sonning Deanery branch who don’t want to miss out on the fun and the Oxford Diocesan Guild band which covers the rest of the Guild.

Unlike the ODG band which requires children to already be competent method ringers before they are allowed to attend practices, the B&BYR has never put restrictions on those that can ring with us and has always been open to anybody who can handle a bell. Nonetheless a band made up of members from a couple of little local branches has come 3rd out of 16 teams in the National Youth Contest and our little branch has produced ringers that have beaten bands that cover entire Guilds and Associations!

If you see any of our band members at your tower practices, do congratulate them and I’m sure they would be delighted to show you their medal. Therefore, not only are the Bucks and Berks Young Ringers the “most fun Young Ringers Team in the UK” we are also one of the most successful teams having entered every year since 2018! Do look out for a full official report in a future edition of the Ringing World and look out for the B&BYR green polo shirts in the photos!

Our victorious band were:
1. Cordelia Thompson (Hughenden)
2. Charley Smith (Bray)
3. Sam Boughton (Hambleden)
4. Lily Cassap (C) (Marlow)
5. Holley Wakeling (Clewer)
6. Matthew Steele (Twyford)
7.
In addition, our reserve ringer (Rebecca Shuttleworth of Sonning) filled in for the Norfolk Young Ringers when one of their band was unable to ring in the contest and helped them gain a creditable 8th place. The ODG band also did well achieving joint 4th out of the 7 teams in their category.

Whilst the B&BYR now have their summer break, practices will restart in September and there are plans afoot for our annual ringing outing to Central London held jointly with the Surrey Strikers and Go Bellistic! (the Salisbury Guild youth band) as well as the South East England Contest in the Spring.

As always, if you have any young ringers under the age of 20-something who would like to join in the fun and ring with what is now officially one of the best young ringers’ teams in the country, they would be more than welcome to come along to any of our practices held on the first Sunday of the month or contact me to find out about our next event.