This year’s events took place in Sonning Deanery beginning with a morning competition at Warfield. We welcomed back Louise Booth from Bermondsey and Docklands Ringing Centre who officiated at our 6-Bell final last month and, to assist her, she brought her dad, Peter Joyce from Gravesend, Kent.
Louise set down their modus operandi for judging striking competitions and added that the bells were a good choice for a striking competition on account of their falseness. They both enjoyed the musical test piece, 269 Grandsire Caters, especially the music of the back bells. Six teams took part, Oxford City Branch having had to cancel through lack of numbers.

People made a Herculean effort to attend in atrocious weather conditions, especially those from the North of the Guild. Unfortunately, the Ted Peett trophy couldn’t be presented as it seems to have been lost! Instead, young Jack Page, conductor of the Reading band was congratulated by the judges. You might have heard more about him in the Birmingham area! The judges were thanked warmly by Deputy Master, Tony Crabtree, as were the Warfield ringers for their arrangements and a splendid lunch. 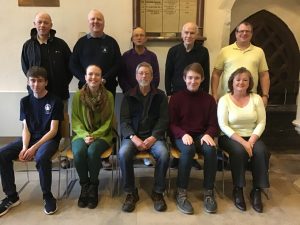 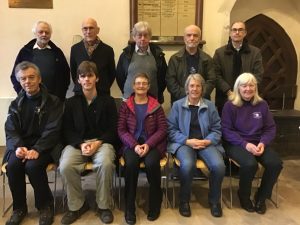 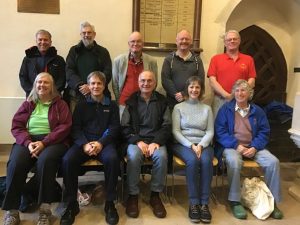 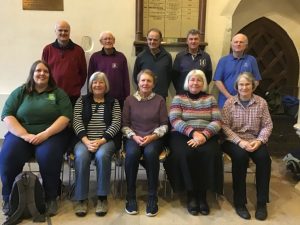 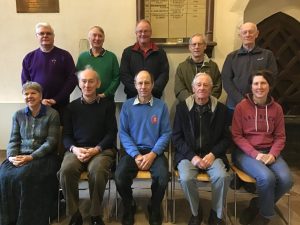 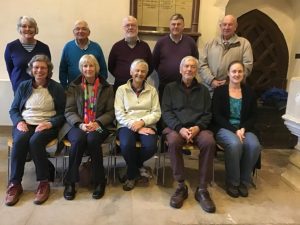 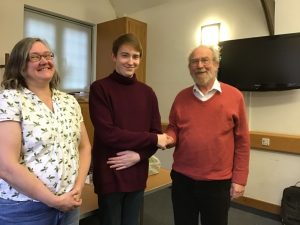 In the absence of the Ted Pett trophy, the judges, Louise Booth and Peter Joyce shake hands with the conductor, Jack Page.

This meeting, held in the Ark at Sonning Church, was called to discuss the future of the two Guild bell funds and to amalgamate them while satisfying the rules of the Charities Commission. This idea has been a bone of contention within the membership almost since the Capital Bell Fund was established in the ’70s by the late Henry Lawrenson et al. Brian Gatward, Vice President of the Guild and for many years its treasurer, gave us a history of the Restoration Fund, which was established in 1926 mostly in memory of dead ringers from WWI and, for some, this has always had some sentimental attachment. Tim Pett seconded the motion that the two funds should be amalgamated and this time, for the first time ever, there were no detractors.
Groups were formed to discuss how we can gain better methods of communication within the Guild and with other ringers and the general public. These ideas were shared with the membership and will be taken forward by the Master, Katie Lane and the rest of her team. They also have plans to make better uses of the General Committee and to reduce its numbers to make debate more efficient.
The Sonning ringers put on a fantastic and imaginative tea and were thanked for it, once again by the Deputy Master.