Saturday 2nd November at Shrivenham saw an enthusiastic gathering of ringers from across the region. The event was the ODG Ten-Bell Course and the focus was Grandsire Caters.

Whilst the rain lashed down outside, the ringers were dry and warm and full of excitement for the achievements to come. I was there as honorary tenor ringer but in the usual VOWH spirit of learning and development I was encouraged to ring the treble – partial success was gained for me and the other ringers who were able to keep steady whilst the treble was elsewhere!!

The students had ample opportunity to ring with expert support and by lunch time had all improved their practice.

An excellent lunch was provided at the Prince of Wales which allowed for ringers refuelling and to have a critique of the morning’s achievements.
The afternoon’s activity was to include 4 quarter peals – two at Longcot and two at Shrivenham. The first Shrivenham group successfully got their ten bell Grandsire Caters (Pictured) with firsts for a few of us – including me being my first Quarter on 10.

Despite Gallant efforts the other three quarters were lost: one in the last minute! Nonetheless the objective of improved ringing skill on ten bell methods and lots of fun was achieved. 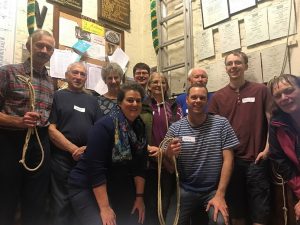 Thank you to Tony and others for organising and supporting such a successful fun day.