Following a year of preparation, on Friday 5th July 2019, 10 young members of the ODG set off for Liverpool to take part in the Ringing World National Youth Striking Competition (RWNYC) which took place on Saturday 6th. After meeting Sophie who came up by train having set out very early on the Saturday morning, the team headed for some general ringing at a couple of ‘interesting’ 8’s at Bootle and Walton, producing some ringing of a somewhat mixed quality. More through the quality and ‘ringability’ of the bells than anything else. Daniel’s angry face was quite a picture when he seemed to be having some difficulty with the 2nd at Walton.

The team’s designated slot at the beautiful 42cwt 12 at St Nicholas, Pier Head was immediately before lunch, after which everyone settled for a few hours of good practice on handbells and some good fun on the mini rung in the ground of St Nicholas. It would have to be said that it was hard for the smaller bells to compete with the sound of the grand tower bells emanating from the tower almost all of the day.

Having been drawn to ring 22nd out of 24 entrants, the team set off for St Francis Xavier (8 @ 16cwt) ready for their big moment at 4pm. Following an allowed 5 minutes of practice, the following band performed 168 Grandsire Triples as their test piece:

By the time everyone had returned to Pier Head, there was not long to wait for the results at 6pm. In the packed church, the tension within the team was high as we got down to the last two teams with the ODG yet to be named. A tension that was abruptly let loose as the second place team was announced, confirming that the ODG had indeed won.

They had done it, first place in the National Competition. The team collected their medals and the Whitechapel Trophy was duly handed to Dougie, which Sophie subsequently managed to drop on the floor, much to the hilarity of all present. This did not however detract from the visible delight at having been placed first in such a prestigious event. 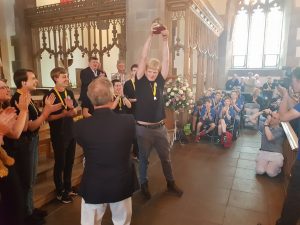 Judging comments – You rang steadily but in a controlled manner. You had a good sense of what you were doing as a team which kept you going through the odd inaccuracy.  The roll ups and downs were executed well. Pleasing. Well done.

Well done to a fantastic team.