While the Old North Berks branch holds little outings for young ringers each school holiday, this time we decided to be more adventurous and organise a big day out especially for young ringers in the whole Guild.  Visiting Oxford was an ideal choice. 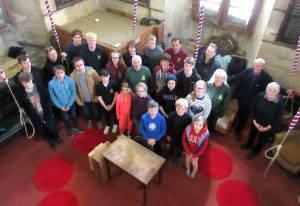 Nineteen young ringers from around the ODG and around thirty parents including some ringers met in Oxford on the chilly but sunny morning, ready to ring at seven towers in central Oxford.  Our first two towers were the light tens at St Thomas and St Mary Magdalen.  Ringing was good, ranging from rounds to plain hunt on nine to surprise major.

St Giles, just up the road had a steep stair ending with a ladder into a very crowded ringing room.  We rang plain bob and grandsire triples as well as rounds and call changes.

At lunch time we had a treat!  We provided our own packed lunches, but the Parish Room had lots to entertain us – firstly Daphne’s wonderful selection of cakes and scones and things to drink.  Then an excellent book stall with ART books that many of us hadn’t seen before.  Also there was the chance to ring plain hunt on handbells with some experts.  But perhaps best of all, Alan Griffin had brought along his dumbbell with a competition to ring it as the tenor behind to Grandsire Doubles and to get the best score for our striking!  Ten of the young ringers had a go.  (Some had two goes!)

There was a longer walk to the best bells of the day, Magdalen College where the gloomy ringing chamber is furnished with ancient leather covered sofas and some even older wooden pews.  We were nervous that the worthy members of the Oxford Society who had arranged all the towers for us would not approve of the standard of our ringing.  But they reassured us that we were fine and commented that they had heard much worse ringing from some of the other visiting bands who had come there!

Next there was the light eight at Lincoln College and the six at St Aldates where the prize giving was announced.  Josh and Jamie won the handsome big Easter Eggs for their top scores on Alan’s dumbbell.  All those who completed the quiz sheet received a smaller Easter Egg, and these seemed to disappear really quickly!

The last tower was Carfax at the central cross roads of Oxford.  Not all stayed to the end at 6.30 pm, but those who did enjoyed this fine, but challenging six.

Some of the comments on the day:

“I would like to thank you for the experience of ringing at new towers with new people.  I thoroughly enjoyed the day”;

“It improved my ringing and confidence about it”

“Thank you very much for arranging the whole trip and I will be sure to come along to anything else planned in the future.”

The new Volunteer & Leadership committee (V&LC) of the Central Council is keen to promote ringing for young people.  The ODG offered to hold this Ringing Festival in Oxford as a test of the concept for the V&LC.  We were pleased with how well it turned out and hope it encourages similar future ventures.